I HAVE always had a fascination for religions other than the one that I was force-fed at school. I am not an unruly atheist, but simply feel that one should understand or at least lightly explore the views of religions other than your own before deciding what to believe.

To totally refute the beliefs of other religious groups is, as history will tell, sadly often the cause of futile conflict. It always seems that people who want to share their religious views with you never want you to share yours with them …

Anyhoo, I have recently developed an interest in the religions of the Far East, specifically Japan’s Shinto religion. A core belief of Shinto is that all objects — living or not — have spiritual properties, and can thus be blessed. With the increasing introduction of electronics to Japan, there has been an interesting fusing of technology with the practices of Shinto.

Specifically since the introduction of Windows XP to Japan, more and more consumers have been taking their laptops and electronic devices to Shinto priests to be blessed against system crashes and technical failures.

Blessed are the Geek 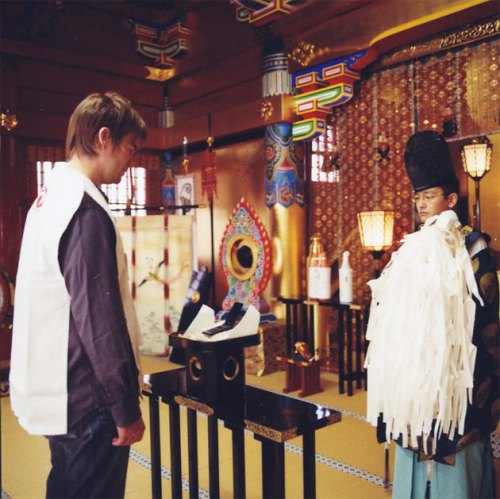 'My cellphone sits in a lacquer tray waiting to be blessed by a Shinto priest. Late last year, I visited the ancient Kanda shrine, located in the heart of Tokyo’s consumer electronics district. The shrine does boffo business offering charms and ceremonial purifications that protect cellphones and laptops and even blogs and ISP services from bad mojo.'

Boom! … Boom! … My chest reverberates with the thumping of a huge wooden drum as two robed holy men shuffle across tatami mats. They kneel in a vermilion-coloured alcove, while an assistant announces that the ceremony has commenced.

The priests begin bowing and chanting rhythmically. I’ve been given a white “robe of cleansing” to wear. Actually, it’s more like a smock. I’m not sure what I should be doing. I bow a couple of times.

I’ve come to the 1 270-year-old Kanda Shrine in Tokyo to purify and bless something very near and dear to me: my cellphone. I’ve had hellish luck with cellphones over the past year. I left one on a ride at Universal Studios Japan. Its successor suddenly (and mysteriously) died. The next one accompanied my pants into the washing machine, and its replacement went awol in less than a week. Divine intervention was needed, and pronto.

Japan’s Shinto religion holds that nearly every object in the world, animate or inanimate, has a spiritual essence. Therefore, anything can be blessed, from a newborn child to an automobile. Priests at the Kanda Shrine, which overlooks Akihabara — Tokyo’s Mecca for consumer electronics — offer prayers for the well-being of gadgets.

Soon requests were pouring in for priests to perform purification rites on laptops, cellphones, even web-portals. Today Kanda offers microchip-shaped good-luck charms for ¥800 (about R64) and private ceremonies for ¥5 000 (about R400).

Back in the great hall, an older priest waves a giant wand — essentially a mop of white parchment streamers — over his counterpart. Thus cleansed, the younger priest rises and carries my phone on a tray to the main altar. He begins a low-pitched chant, invoking the shrine’s deities to “watch over and protect Brian Ashcraft’s cellular phone”.

As the sound of plucked koto strings echoes through the hall, the assistant jingles gold bells over my head. I’m told to approach the altar and am given a tree branch — an offering to the shrine’s deities. A priest painstakingly instructs me to turn the branch 180° —no, no, clockwise— and place it on the altar. I am then told to bow deeply twice —that’s good — and clap twice.

Most Japanese people would probably stumble through this intricate ceremony as clumsily as I do, but the tenets of Shinto are deeply ingrained in their consciousness. It occurs to me that this must affect how they view their little electronic helpmates. Perhaps gadgets really do have souls. Maybe my problem isn’t bad luck, maybe I simply haven’t been giving my phones the respect they deserve. I bow again, and the ceremony concludes.

Near the great hall’s exit, I am presented with a wooden plaque certifying that my cell has been purified. Over a cup of sake, senior priest Katsuji Takahashi chuckles as he tells me, “I’ve lost my phone twice, but both times it turned up.”

Seven months later, my blessed cellphone is still with me.

We really do live in a weird wired world.